For the first time, Hailey Turner’s Metahuman Files and Metahuman Files: Classified Novella series have been brought together in three epic box sets! Please note, no new content has been added.

Volume Three:
In the Requiem
Captain Jamie Callahan must choose between saving his family’s reputation and his father’s political aspirations or taking down the enemy once and for all. Whatever he decides, Staff Sergeant Kyle Brannigan will stand with him to face the consequences. Staff Sergeant Alexei Dvorkin and Agent Sean Delaney, along with the rest of Alpha Team, are prepared to follow their captain into an uncertain future where the odds are stacked against them and outmaneuvering a precog is a daunting, almost impossible task.

New Horizons
Trevor Sanchez left behind a life of war with Alpha Team for a future in medicine. When the teaching hospital he attends is attacked, Trevor finds himself rescuing paramedic Brendan Kane from a familiar enemy. The pair must navigate their way through danger before they can give in to the attraction growing between them.

Fire in the Heart
Alexei has come a long way since being turned into a metahuman, and all he wants to do is marry the man he loves. Sean just wants a romantic honeymoon far away from past troubles. When they stumble into a fellow operative’s mission on the luxury gambling resort island Fortuna-sur-mer, they get more than they bargained for in their newly minted civilian lives.

In the Solace
After Colonel Liam Wessex’s classified identity is revealed to the public, he struggles with the transition into civilian life. Becoming reacquainted with MI6 Agent Oliver Archer forces Liam to reconcile his past actions with a future that just might be the answer to all of his problems. But when terrorists target London and the unthinkable happens, Oliver and Liam learn that second chances come with a price neither can afford to pay. 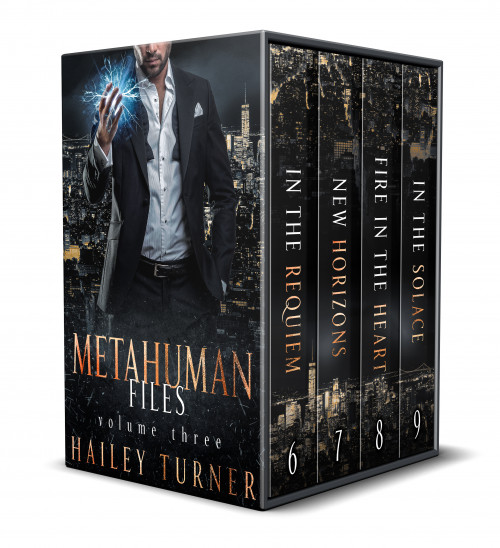